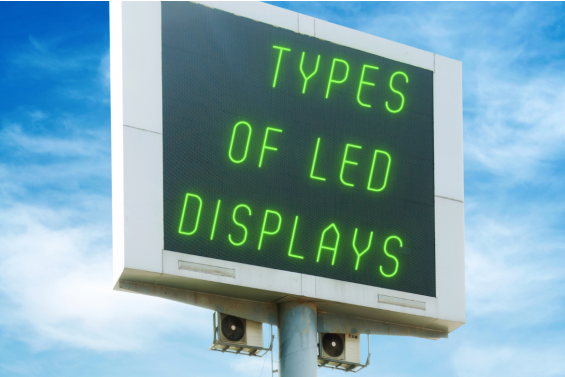 A screen display technology uses LED panels as a light source. In these types of LEDs, a single panel consists of several LEDs. It is well known that the LEDs produce better and greater light intensity than the other light-emitting sources. Modern electronic devices, smartphones, tablets, TVs, computer monitors, etc., use an LED display to showcase the output. These screens are highly efficient and consume low energy.

In recent years, LED displays have been evolving rapidly, mainly due to high brightness, low power consumption, low voltage, easy installation, and stability in the performance. The LED displays can be further divided into various categories based on their shape, type, and size.

LED screens are quite a popular source of carrying commercial advertisements and information for the public. They provide pretty high visibility and can easily be fixed on different structures like buildings, shop windows, and hoardings.

The display brightness required is relatively moderate. These displays can be viewed from quite close by and hence have a wide angle for visibility. They are lightweight as well as have a high density. In the case of the outdoor displays, they are relatively sparse, and the brightness requirements are different. The viewing conditions are other during the day as well as nighttime. These displays need to be viewed from a much longer distance. It should be made sure that the display cabinet can withstand environmental conditions.

This LED display is quite similar to the computer monitor, and it helps display many grayscale colours that can be used to achieve the effect needed in multimedia advertising.

When we talk about synchronization, the display can help store and auto-play the characters and the non-grey images.

LEDs are available in many different types, shapes, and sizes. This is considered the result of various improvements in semiconductor technology in recent years. These days, the LEDs have better illumination, low power consumption, and longer shelf life.

These LEDs mainly consist of three main parts- the underground base constructor, the steel column, and the LED display fixed on the framework. The pillar should be strong enough to support the weight of the display screen.

These LEDs are fitted to the building and covered using an aluminium composite panel on the perimeter of the waterproof cabinet. They are generally used to cover a wide area, and hence, they are suitable to be mounted on the top of the building.

These displays take the shape of a building and are generally for a smaller audience. These are better than flat displays due to the wide-angle view that can be seen from more than one direction.

These displays are well-suited for public roads or highways, and they can be viewed from dual-sided shows. When we see the tri-sided LED displays, they are usually used at the crossroads to be viewed from four directions.

These are the customizable module that is used to assemble unique shapes. These multimedia advertisements can be easily viewed 360 degrees by the audience.

There is a wide selection of products that adapt to various uses. If we choose, many applications and services for LED screens are available. Based on the type, shape, and size, LED displays can be divided into many categories. The LED screens are used commercially due to their efficiency and low energy consumption.